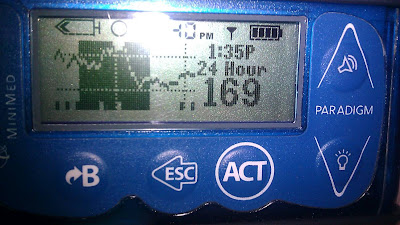 I wanted to show a not so great 24 hour shot of Vince's numbers. Seems he is battling highs again. Hopefully it doesn't last!
Published with Blogger-droid v1.7.4
Posted by Sandy at Sunday, September 25, 2011 No comments: 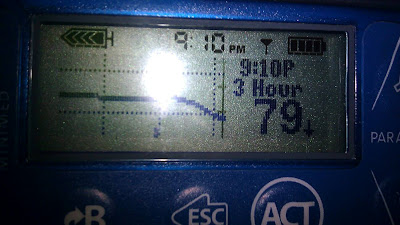 Numbers have been pretty good lately. Well as far as the highs go. The problem when your numbers run good is that you tend to battle more lows, which we are. As you can see this one dipped fast. Just about an hour before, he was 165 and just as we finished dinner, the low alarm rang. Fingerstick confirmed a 59. So to lower vince's A1C, we are back to the same problem as usual, the low battle, however he we win every time!!
Published with Blogger-droid v1.7.4
Posted by Sandy at Friday, September 23, 2011 No comments:

The Cold Has Come 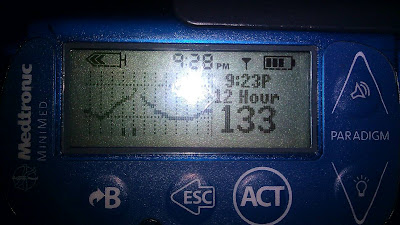 Well, fall is here. I woke up to a 50 degree morning and Vince woke up with a cold. This seems to always happen to him when the weather changes. Hopefully it doesn't hit him to hard. Here is a shot of the last 12 hours. Not to bad. Hopefully it continues!
Published with Blogger-droid v1.7.4
Published with Blogger-droid v1.7.4
Posted by Sandy at Friday, September 16, 2011 1 comment:

Think We Are On To Something!

I am putting my new Smartphone to good use! Gives you a chance to see all the numbers I talk about. Vince's site is still on his leg and readings have been very good. Highs and lows will never go away, but there seems to be less lately. I am still hoping this just isn't a phase.

Here is a picture of the 12 hour readings graph. Pretty good huh? 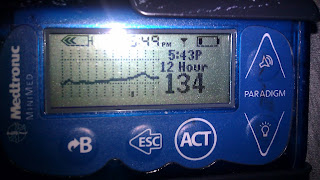 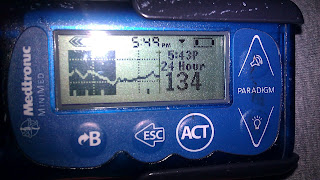 I am very excited, obviously. I am just hoping its not a phase! Will keep you updated!
Posted by Sandy at Thursday, September 08, 2011 3 comments:

CGM: Not Always Perfectly Accurate But Still A Blessing

This morning as I looked at Vince’s pump before leaving for work, the following appeared before me: 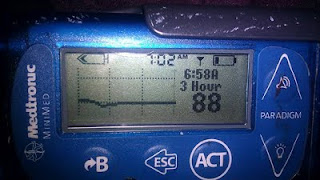 Although this looks great, my sixth sense of detecting low reactions has now broadened to including when not to trust the CGM completely. I went ahead and did a finger stick to double check and this is what I got: 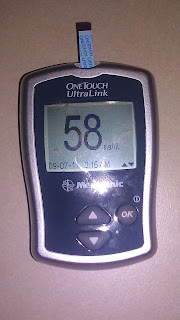 I decided this was a great time to post some pictures of our daily life of numbers so I grabbed my phone and shot a few; after getting him a drink of course! The numbers speak for themselves. A finger stick is always necessary but the CGM is great at giving you an idea on what your doing and where your headed. Might I add, I didn’t realize what a beating the poor pump takes until I saw this picture?! I think it is time to clean off the blood smears from the finger sticks, what do you think?! Ew! Although, I am sure he isn't the only one! You may be wondering what all of the white marks are. Well, due to the retinopathy, Vince has very little depth perception left so when walking around the house and such, sometimes he misjudges and bumps the wall. On top of that, the pump hangs from his pants pocket or off the bottom of his shirt so it can get bumped around.
While taking the pictures this morning, a thought dawned on me. You see, we recently upgraded to smart phones. We were in the stone age before. Didn’t text or use the web! I know, horrible! So now that we have smart phones, I realized something. If I am ever unsure if Vince is okay, he can text me a picture of his pump or finger stick reading! You see, sometimes, I might suspect him of being low when talking to him on the phone and I have to play detective to be sure he is okay. This is a great way for me to know!
Posted by Sandy at Wednesday, September 07, 2011 2 comments:

It seems that since changing Vince's pump site to his thigh, his numbers have improved. Could his stomach be that scared that it was not allowing for proper absorption? In the last 24 hours, he has stayed steady in the lower 100's and only peaked to 160 after meals. I can't believe the difference! I hope it's not just a coincidence and that it is truly the new site area! If this lasts, it could mean less corrections, less insulin, and could aid in less weight gain! Here's to hoping it lasts!
Posted by Sandy at Monday, September 05, 2011 No comments:

It's That Time Again!

Today was Vince's three month Endocrinologist check up. All blood work was taken and the results are in. Kidneys, liver, cholesterol, and blood pressure numbers are all fantastic! Vitamin D level is still lower than recommended however. This is something that is very commonly seen in diabetics. Vince is on weekly supplement and they suggested he continue and see how it is next time around. This has been an ongoing issue but it isn't a severe problem, so it is just something they watch and treat as they can. He was weighed as usual and is continuing to lose weight as well which was so great for us to find out. The weight loss slowed for the time being but as long as it is less and not more, we are in good shape!! Aside from kidney function, our big concern every three months is how is A1C is doing. So where are we at this month? 7.0%! down from the last visit. They looked at all of his glucose readings and decided not to change anything for now. It seems that one day his levels are spectacular at around 90-130 all day long and other days, he runs high all day long. Doc said there is really no explanation left for the highs. The only thing he could think of is the infusion site. You see, for the last 10-15 years, he has used his stomach for his injections and infusion sites. He used his arm and leg when he was small, but then moved to the stomach. The doctor said although the insulin is being infused into the body, it is possible that over the years, to much scar tissue has occurred, resulting in the insulin not being able to be absorbed properly when the site is sitting at certain spots. He suggested Vince try placing the site on his thigh or upper rear since these areas are scar tissue free. He wasn't to excited about using his back-side since he would have trouble reaching it and seeing it to be sure all was well, so he chose the thigh. Today happened to be a site change day, so tonight, I loaded it up and injected it into his thigh. We will see over the next few days how his sugar reacts to the new site area. Now that I have recorded all of the medical stuff here, I should also write about a new doctor we were introduced to at the office. At the office, there is Vince's doctor and a nurse practitioner. They prefer patients to see the doctor once a year and the nurse the other three visits during the year. We did this at first however, we were not overly thrilled with the nurse so we asked to make all of the appointments with the doctor and they agreed. I mean, WE are paying THEM for the care, so I think we should have a say in who he sees. Well, today when the doctor took us back, there was a young woman in the room. He introduced us to her and explained she is a new doctor that joined the practice. We were open minded at first. The doctor knows Vince and he stayed and went over the normal findings with us. He then left the room for the new doctor to do, umm, whatever it was she had to do. She listened to Vince's chest, felt (well, poked the heck out of) his throat, asked him if his feet tingled about three times after Vince said he has neuropathy. He also told her a few times that he has retinopathy and she said did you recently have treatments? Vince was like, umm, yeah, years ago...(it's in his record!!) she then asked to LOOK at his eye. We are still not sure what that was all about. Did she think she could see the retinopathy by just looking at it? This is when we started to become skeptical. As we were sitting there, she went over his current medications and updated his file in their computer. Well, she tried, but as she said herself, she went to medical school, not computer school. Umm, how is a young doctor that just graduated not computer savvy or literate? So Vince's doctor came back and took over and got the necessary scripts printed out and sent us on our way. Vince and I both asked each other what in the world she was doing. This wasn't a wellness exam at the family doctor! This is a specialists office. She is supposed to be an endocrinologist. She didn't give us to much faith that she knew endocrinology too well though. Even when she was getting the blood work paperwork together, she put fasting and when the doctor looked at it to help her, he said he doesn't need to fast this time. I tend to not ask them to fast unless it's absolutely needed. Duh, these ARE diabetics they are dealing with! I think I could have filled out the paperwork better than she did! I know all doctors have to start somewhere, but we just feel that she is way to inexperienced to deal with all that Vince has going on. We requested the next appointment with his regular doctor and will continue to do so. Other than that little hiccup, all went well!!
Posted by Sandy at Thursday, September 01, 2011 2 comments:

Sandy
My name is Sandy and I am the wife of a Type 1 Diabetic, Vince. Along with Type 1 Diabetes, he also has Diabetic Neuropathy, Diabetic Retinopathy, and Hypoglycemia Unawareness.

Dedicated to my handsome, loving, strong, determined husband who lives everyday with Type 1 Diabetes, Diabetic Neuropathy, and Diabetic Retinopathy. He is a wonderful man, among many others, in need of a cure for these horrible diseases.